310 Athletes Save Their Best for Nationals 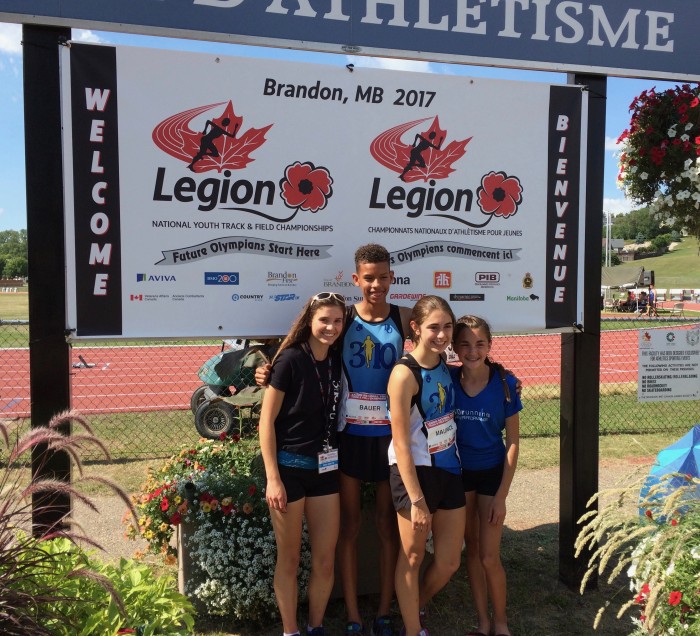 310 Running had nine athletes meet the qualifying standards for Legion Nationals with five choosing to travel to Brandon, Manitoba to compete in them from August 11-13.

Lexy Maurice returned to Nationals for the second time to compete in the Midget girls high jump. After successfully making some late adjustments to her approach in practice on Saturday, Lexy easily equaled her personal best height of 1.45m on Sunday. She narrowly missed at 1.50m and finished the competition in 11th.

Aysia Maurice, who was also competing in her second Legion National Championships, had a busy weekend. On Friday, Aysia posted a ninth place finish in the Midget girls 1200 with a 3:46.28, eclipsing her previous best time by 5.34 seconds. On Saturday, she also placed ninth posting a 2.47 second PB time of 6:45.99 in her Midget girls 2000. Maurice saved the best for last, running a 5:02.27 in the Midget girls 1500 steeplechase on Sunday. This result was a 6.90 second improvement over her record breaking effort at the Provincial Championships held two weeks earlier and was good for 5th in Canada. 13 year old Aysia now holds the U15 and U16 Ontario Provincial records for the 1500 steeplechase.

Cameron Moir made his debut at Legion Nationals in the Midget boys 800. Cameron, who has set PBs in almost every 800 this season, proved once again that he was capable of going faster. His 2:03.14 on Sunday beat his best 800 time by 1.84 seconds to secure a 10th place finish.

Finally Sarah-Rose Sullivan, another first timer at Nationals, raced in the Midget girls 800 and 1200. On Friday Sarah-Rose dropped her best 1200 time by 4.56 second finishing just behind her teammate in 10th in 3:48.02. On Sunday, Sullivan was back on the track where her 2:20.49 800 time earned her 7th place and her second PB of the weekend.

Out of the nine events the 310 Running athletes competed in, they had six top ten finishes, eight new personal bests, one equaled personal best and everyone improved on their seed position.